Visiting India has always brought lots of joy as I get to see how my homeland is fairing over the time I haven’t been here (haha, I talk like a condescending NRI already ;) ). Also, it is this vacation time where I try to meet my relatives and as many friends as time permits over the short period. One of the special things that happened over my current visit was the chance encounter with an old professor of Electrical Engineering from my undergrad university IIT BHU. He retired after a career that spanned over 4 decades and was one of the most respected figures among our faculty members at BHU.

Recently after visiting my grandparents in Nadikudi (about 150 km from Hyderabad), I was getting back to the Hyderabad airport to catch my flight for Allahabad. As usual, I was in a deep slumber into a book that I purchased ** a few hours back from the Secunderabad railway station and slowly waded towards the boarding area. Suddenly, as I glanced above just to confirm the flight timings and delays, I saw a resembling figure sitting on the nearest chair from me. It was none other than our old professor. He taught us Algorithms in junior year of the undergrad. Just last year he retired from the university and since then, no-one really knew what he is up to.

Over the years, you learn how to distinguish people who carry a grace and intellectual aura around them and others who are more living on a plainer and tangible virtues of life. On this specific test, I have found this professor at the highest, as if resembling the epitome of righteousness and integrity. He was sitting there with his wife, very quietly as if meditating, onlooking the normal commotion of the airport. I couldn’t help but gravitated towards him and presented myself in-front of him. I was extremely pleased and excited at the same time and my mouth accorded on its own, and without any professional courtesy as the situation demanded, just blurted out: “ Are you SCG sir? I mean, is your name SCG … Suresh … did you teach in IIT BHU … “. My sudden appearance startled him and he seemed confused in the starting. Slowly, as he saw a tall lanky guy just standing in front of him, demanding to know if he is who he is, he may be from previous encounters over his several decades of teaching spurted a broad smile and asked me to sit beside him. I sat, realizing now that in the last minute or so, I lost control over my senses and only now I am regaining it bit by bit.

SCG sir was a reticent figure in our department. He would only speak if the situation demanded and would keep silent otherwise. I knew this beforehand and thus tried to tell him that I am a former student of his from BHU, that I graduated from 2015 batch of Electrical engineering and he taught us Algorithms way back in 2014 in my junior year. He asked my name and I told him that. It appeared as if he strained his brain and only after few seconds, with a convincing smile said he does remember our few email conversations from a few years back. I was glad that he does remember something about me. I asked about his flight timings and got to know that he is waiting for his flight to Lucknow at 4:20 PM. I checked my watch and it was just 1 PM. He is very early I said, and he mentioned that he was actually coming from Bangalore and Hyderabad was just a layover for him to change the connecting flights. Well, my flight was at 3:40 PM and hence we had some time to chat. Slowly we eased into a conversation and started talking about BHU and Varanasi.

Some excerpt from our conversation:

Me: Sir, why Lucknow now?

Sir: I guess, that is where I will live from now on.

Me: Anyone accompanying you there?

Sir: Me and my wife by ourselves, as of now.

Me: Why not in Varanasi sir?

Sir: I have lived there for 4 decades in the BHU campus area. Living in Varanasi outside of campus is not an easy task. (with a smile) so we planned to settle in Lucknow.

Me: Hmm… I guess it makes sense.

Sir: So Abhijeet, what have you been up to? Where do you live?

Me: I work in Bloomberg sir. I live in New York City. I came to India for a vacation for 20 days and was just now coming after a paying a visit to my Grandparents.

Sir: I think I have heard the name Bloomberg somewhere. What does it do?

Me: It sells software related to trading and finance. I work on that software.

Me: Pretty great to be honest. Learning quite a few new things there. Learnt C++ from some Bell labs veterans. I think it is good.

Me: So sir, since you have been involved with lots of students and have seen the Electrical of BHU for a long time, what do you feel about the current state of it as compared to the past?

Sir: (after thinking a lot) I will speak about what I taught. I think the speed in which revolution around computers has taken place is so fast that our curriculum couldn’t keep pace with the change. I think students are well better if they keep learning things from around them. Getting overly dependent on the coursework is no more sufficient.

Me: Do you think living in states is good, or living in India?

Sir: Haha. Whatever makes you happy, do that. Other things are secondary.

I told him about the differences between living in USA and India. Told him how opposite Varanasi is to the way world of Manhattan works. He listened to everything very intently and commented here and there. I told him about my family and stuff. Asked about his children and how they are doing.

I always knew that I am kind off a failure in conversing with another person for a longer time and it was very evident then. I couldn’t think of anything to speak so took out another book and started reading. This one was titled: “Meditative practices according to Yoga and Vedanta by Swami Adiswarananda”. After reading the book for 15 minutes or so, I realized sir realized that I was reading something related to Vedanta. He looked a bit taken aback, and I realized that I have the chance now, that it is this moment when I have to ask since I don’t know any better … and since we have exhausted all other cursory topics: “Sir do you know Vedanta?”.

And at last, a wide-eyed sir, completely astonished and tranced replied: “It is the thing!”. We went onto discussing the loftiest philosophies of Vedanta and Advaita. I finally found a topic to talk to our old professor in which he had the same curiosity as me. I cannot, to be frank, write here what we discussed as it will make no sense without a context but that encounter instantly reminded me of the time after my 2nd year of undergrad when I was completely lost on what to do in those next 2 years of Engineering. Everyone seemed to just know but I always felt a certain disconnect with all the stuff we do. Never understanding what entails for me in that place and what is the point of studying, I went to sir’s office at that time and told him outrightly that I am lost. It is as if the same conjecture presented myself again, and again I found the same professor although this time in a different manner.

I remarked at some point that I should have known about these philosophies at the later part of my life to which he replied that few things are destined and not in our hands. The work must not stop and he made sure that I understand it again after those 4 years.

The time flew after that and I had to hurry for my flight. The best I could do was sit respectfully near his feet and get a photograph so that I remember what I forgot after these last 4 years when I met him in his office for the 1st time. 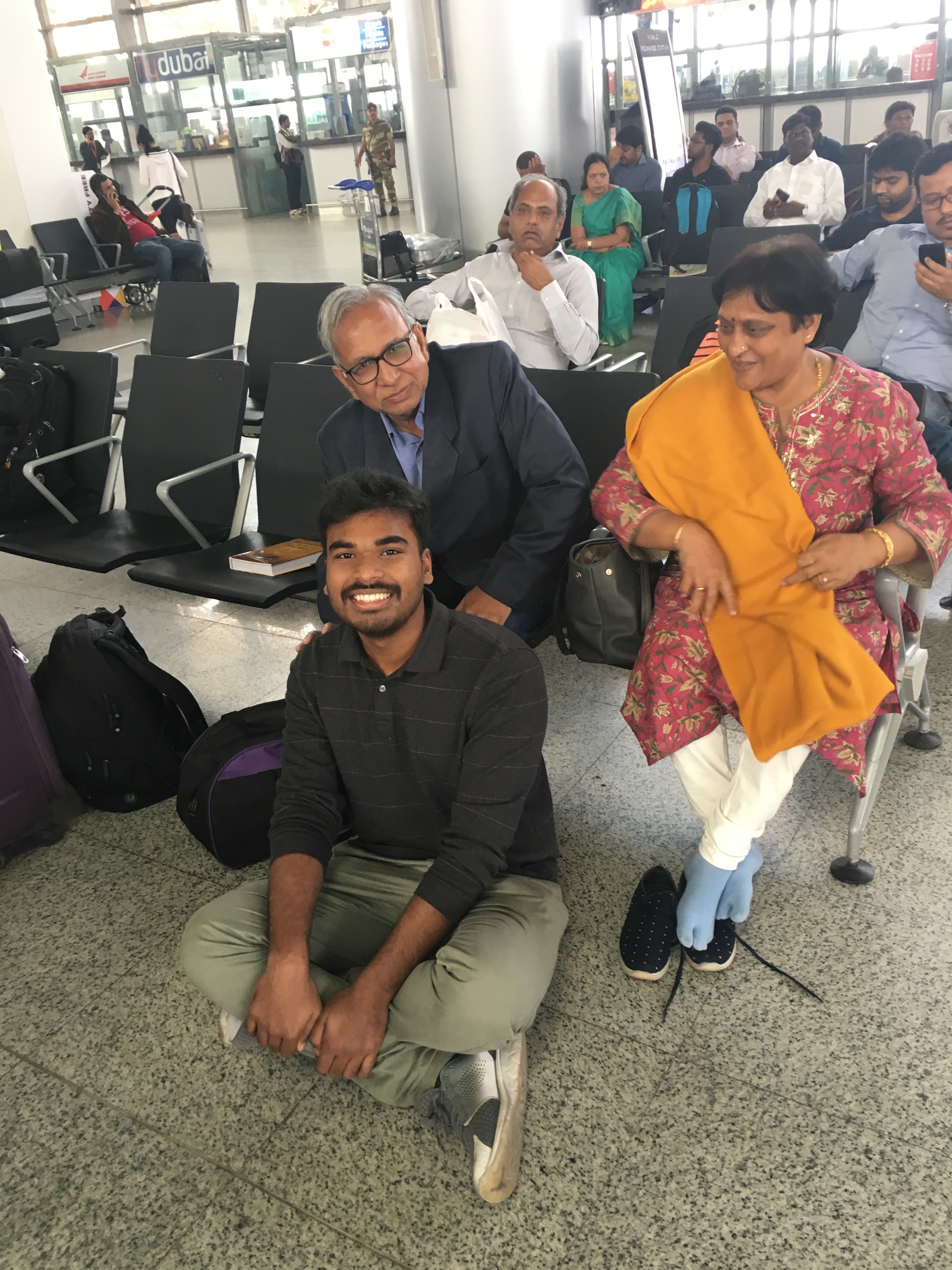 (** As mentioned before, on my quest to meet people all over the country, these vacations are marked by many internal train and plane rides to various cities all over India. I love all travel times as they give me uninterrupted access to read whether it is my subway commute to Manhattan or a slow train ride here in India or any flight with good reading lights. Another reason for enjoying books a lot here than the USA is the fact that how cheap one can get books! So as a ritual, before a train/plane travel, I buy a book and by the time travel ends, I try to get done with it. The only reason you need to know that I follow this ritual is to know why there were different kind of books in my bag when I reached Hyderabad airport.)